“It’s been the craziest seven or eight weeks of my life,” said Mike Quinoy.

Quinoy, the VP of Commercial Sales for AeroClave, a Winter Park based company that manufactures large-scale decontamination solutions, says the company’s sales have quadrupled since news of the COVID-19 pandemic spread.

Born out of the SARS epidemic in 2003, AeroClave was founded by Dr. Ronald Brown `86MBA, who was the then medical director of Seminole County.

“At the time, the Sanford airport was the receiving airport for infectious airplanes coming to Orlando. They had plans for the people, equipment and airport, but no plans for the plane,” said Quinoy.

Dr. Brown theorized that a technology could be created that would disinfect the planes.

“We took the technology, miniaturized it, made it simple and easy to use,” said Quinoy. “It’s now the size of a suitcase that you can throw in the back of a truck, to decontaminate any ambulance, fire truck, etc.”

In the months leading up to COVID-19 breaking onto U.S. soil, Quinoy and team at AeroClave were having internal conversations, mostly high-level discussions on what-ifs if COVID-19 were to come to the U.S.

“At that time, we thought we might see some uptick in interest and business in AeroClave products, but I don’t think any of us realized what was coming,” said Quinoy. 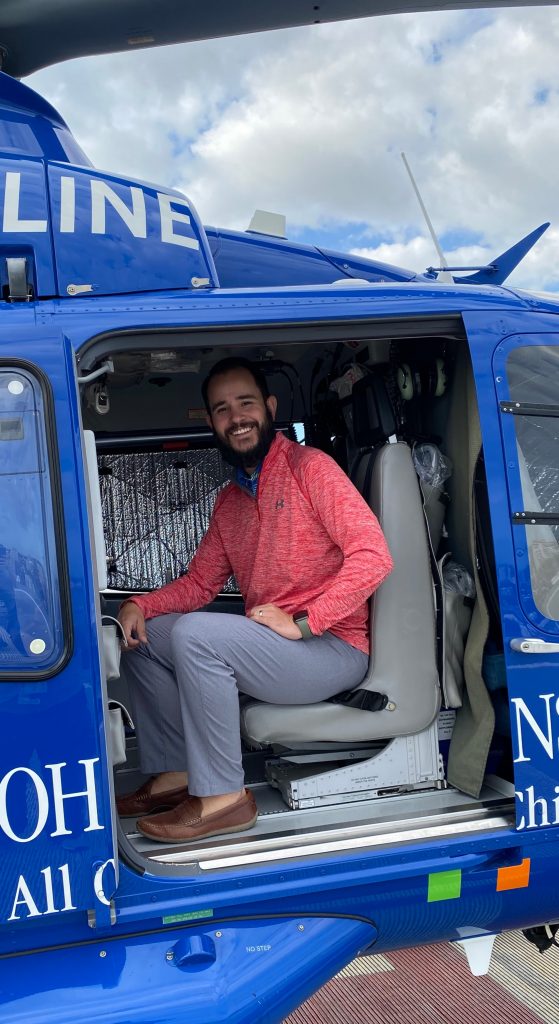 Around Valentine’s Day, AeroClave starting fielding calls from prospective customers, but the conversations were mostly about learning more about the AeroClave product, just in case things got more serious.

The floodgates opened a couple of weeks later in early March.

The phone calls went from mere interest in AeroClave technology to prospective customers saying they had confirmed cases of COVID-19 and needed the equipment as soon as possible.

“You could really track the news headlines and where we would receive calls from,” said Quinoy. “When New York started seeing an uptick in cases, we were fielding calls from New York all day.”

By the last weekend of March, a crescendo was reached, with AeroClave fielding calls from industries they’ve never worked with before. Private aviation, property management, real estate agents and more were all interested in AeroClave.

Not surprisingly, Quinoy and the AeroClave team haven’t had the chance to reflect much on what this means for business going forward.

“Obviously, we are going to have to change our business model,” said Quinoy.

One thing is for certain though.

“This is going to change the game for us and the industry as a whole,” he said.

A company that once worked mostly with aircrafts and health services is going to start doing business with industries like food safety, hotels, rental car agencies and more.

“This industry as a whole is going to be more widespread,” said Quinoy. “In the next year, you will not book a hotel room without discussing decontamination or disinfection. Same thing with rental cars, booking a flight and restaurant chains.”

How exactly will AeroClave grow?

Right now, Quinoy says the company doesn’t have a marketing team, which will have to change. Internally, their supply chain process will need to speed up, as they will be easily producing double of the number of units in order to meet market demands.

“Our small core group of people have been able to tackle every challenge so far,” he said.

Quinoy started at AeroClave in 2010, and then enrolled in the PMBA program shortly after.

“In my infancy here at AeroClave, I was able to take lessons learned at night in my PMBA class and apply them at my job the next morning, which was fantastic,” he said.

His time spent at Crummer is described as a “live-fire” environment, learning business concepts in class and then having the opportunity to test them at an upstart company like AeroClave.

“Crummer enabled me to have a lot of confidence that most 24-year-olds would not have, to take these ideas and lessons and put them into play like I have,” said Quinoy. “It really helped me mature and fast-tracked my maturation.”

Less than a decade later, when a global pandemic hit and AeroClave was thrust into the spotlight, his confidence gained from Crummer enabled him to navigate through the craziest time of his professional life.

One of Crummer’s most distinguished alumna, Roseann Harrington `90MBA, says being named the 2019 Crummer commencement speaker is a highlight of her career.

Crummer School Professor of Operations Management Dr. Keenan Yoho explains the delays we’ve seen in global supply chains and what this could mean for the future of how we look at the global economy.